Shri Jairam Ramesh                                                                                          23rd August 2011
Hon’ble Union Minister of Rural Development
Ministry of Rural Development
Government of
Subject:           BKU Memorandum on the Acquisition and Rehabilitation and Resettlement Bill 2011
Dear Sir,
We, the representatives of the Bhartiya Kissan Union (Non-Political), would like to congratulate you for the timely formulation of the draft legislation on Land Acquisition and Rehabilitation and Resettlement (LARR), 2011. We are also thankful to you for presenting a comprehensive bill with Rehabilitation and Resettlement as intrinsic part of the Bill, which addresses the concerns of farmers and all those whose livelihoods are dependent on the land being acquired.
However, as members of the farming community, we are quite disappointed that the bill is only driven by a desire to make land acquisition for industrialization, while completely ignoring the larger picture of food security and feeding the masses in this period of food crisis and high inflation. Though the bill puts some check in protecting the multi-cropped and irrigated land from acquisition by saying that “under no circumstances should multi-cropped, irrigated land be acquired”, yet it failed to address the larger challenge of extensive diversion of agricultural land across the country for non-agricultural purposes and the consequent impact on the nation’s food security.
Since you have sought comments on the Draft LARR Bill 2011, we have following points for your consideration.
1.         We are quite disappointed by the provision on “minimum compensation” for land acquisition in the bill which says that in rural areas, the compensation will amount to six times the ‘market value’ of the land while in urban areas it would be at least twice the ‘market value’. The mechanism to determine the ‘Market Value’ is quite flawed because it does not take into consideration the “actual value” but the ‘minimum value’ specified in the Indian Stamp Act 1899 for registration of sale deeds in the area or by average sale price of 50 % sale deeds registered during past 3 years. As per this method for determining the land value, the landowners will never get the actual value of their land because, in general practice in India, the sale deed registrations is done on much lower stamp duty than the actual rate paid to the landowner in order to avoid paying the registration charges to the government. There is always a big gap between the stamp duty price and market value of the land and it will be a grave injustice to the farmers if we relate ‘stamp duty’ with the ‘market value’. Therefore the market price must be determined as the operative price of the land at the time of purchase. We demand that the minimum compensation for the agricultural land must be fixed at 25 times of operative/ actual price at the time of purchase in Rural Areas and 10 times of operative/ actual price in Urban Areas.
2.         Secondly the value of a patch of land multiplies manifold when it gets converted from agricultural to commercial. Therefore the compensation should take into consideration the future price and value increase for the next 33 years as a result of the change in the land use. Moreover the provisions of R&R in the bill only applies to one family (landowner) irrespective of the fact that in each family there may be more than one adult member/s who may also dependent for their subsistence on the land acquired. This bill does not take into consideration the joint family system in rural where sons and grandsons are all dependent on the family land for their livelihood. Therefore we demand that the every adult member of the landowner family must be made entitled for R&R provisions and instead of one, every adult member of the affected landowner’s family must be given employment compulsorily. This can never be substituted with a onetime payment of just rupees two lakh. We would like to insist again that for livelihood loser (including landless) there must be mandatory employment guarantee for every adult member/s of the affected family.
We hope that you and your Ministry would take the necessary steps to make these crucial changes in the draft legislation on Land Acquisition and Rehabilitation and Resettlement (LARR), 2011, in the interest of millions of small and marginal farmers whose only source of sustenance are their meager piece of lands which are under great threat of acquisition to foster industrialization.
Please find enclosed herewith some important suggestions.
Anticipating a positive and timely response
We would be grateful for your cooperation.
Signed by:
Ch. Naresh Tiket, President, BKU
Yudhvir Singh, General Secretary, BKU (+91-9868146405)
Rakesh Tikait, Spokesperson, BKU-09219666799
Singh Lakhowal, State President, BKU
Jagdish Singh, State President, BKU Madhya Pradesh
Gurnam Singh, State President, BKU Haryana,
Rajpal Ponia, State President, BKU Rajasthan
S.S. Gill, State President, Himachal Pradesh
S.S. Cheema, BKU Uttrakhand,
Posted by Farmer's Voice BKU(4981) at 7:26 AM 2 comments:

Government’s proposes to decontrol urea prices and increase prices by 10 per cent.

Government’s proposes to decontrol urea prices and increase prices by 10 per cent. The empowered group of ministers on August 5 approved the Saumitra Chaudhuri Committee recommendations to decontrol urea and allow increase in prices by 10 per cent initially and later bring it under nutrient based subsidy by October.
The 10 per cent hike in per tonne over the current maximum retail price (MRP) of Rs 5,310/tonne could translate to an additional expenditure of up to Rs 530/- for farmers. From next year,  companies will have a free hand and farm gate prices of urea will be fixed by them. The fertiliser companies will also pass on any increases in gas pricing and additional taxes imposed directly onto the farmers.

This decision should be seen in the light of the startling revelations of the Comptroller and Auditor General of India’s “Performance Audit of Fertiliser Subsidy” report tabled in parliament on August 5, 2011 which found that 45 per cent of farmers pay more than the MRP and nearly 60 percent face problems in getting their season’s full requirement in time. It also pointed to the problem of artificial shortages created by dealers during peak seasons to hike prices much above the MRP. Instead of putting an end to black-marketing and corrupt practices, the government measure is only going to put the farmers at the mercy of fertiliser cartels. The CAG has also indicted the government’s fertiliser policy for deliberately pushing costly imports and turning away the focus from indigenous production of urea which is a key farm input. The present move by the government is despite strong indictment of the new pricing scheme for urea by the CAG.

Already the government had on July 8, 2011 by a notification, withdrawn any restraint on increasing prices of non-urea fertilisers by the companies and stated that the market price of non-urea fertilisers “will be open”. It rescinded an earlier notification of May 5, 2011  that had allowed companies to increase MRP of Di Ammonium Phosphate (DAP) by Rs 600/tonne in addition to the MRP prevailing then (Rs 10,750/tonne) and also a proportionate increase in MRP of complex fertilisers (corresponding to that in DAP). The MRP of DAP according to the May 5th notification would translate into Rs 11,470/tonne. In the light of the July 8th notification the MRP of DAP inclusive of VAT if calculated based on the imported cost of DAP at $650/tonne will translate into around Rs 14,300/tonne. This would mean an exorbitant increase of Rs 3550/tonne of DAP within the last two months. The government move on urea is coming at a time when already farmers are paying hefty amount for non-urea fertilisers and rising input costs are a disincentive to cultivation.

Urea is a key agricultural input. Decontrol of urea prices, like in the case of DAP and other complex fertilisers will put a big burden on the peasantry and costs of production will increase substantially. 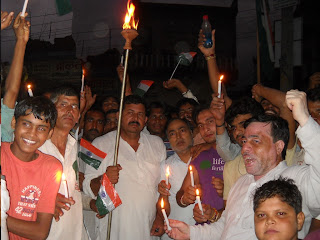 bhartiya kisan union pledges its support for anna hazare. BKU, said rakesh tikait,. it's offcial spokesperson "has already taken out protest marches in a dozen distrcits and will intesify the agitation furhter if anna is not realsed."
Posted by Farmer's Voice BKU(4981) at 5:57 AM No comments: