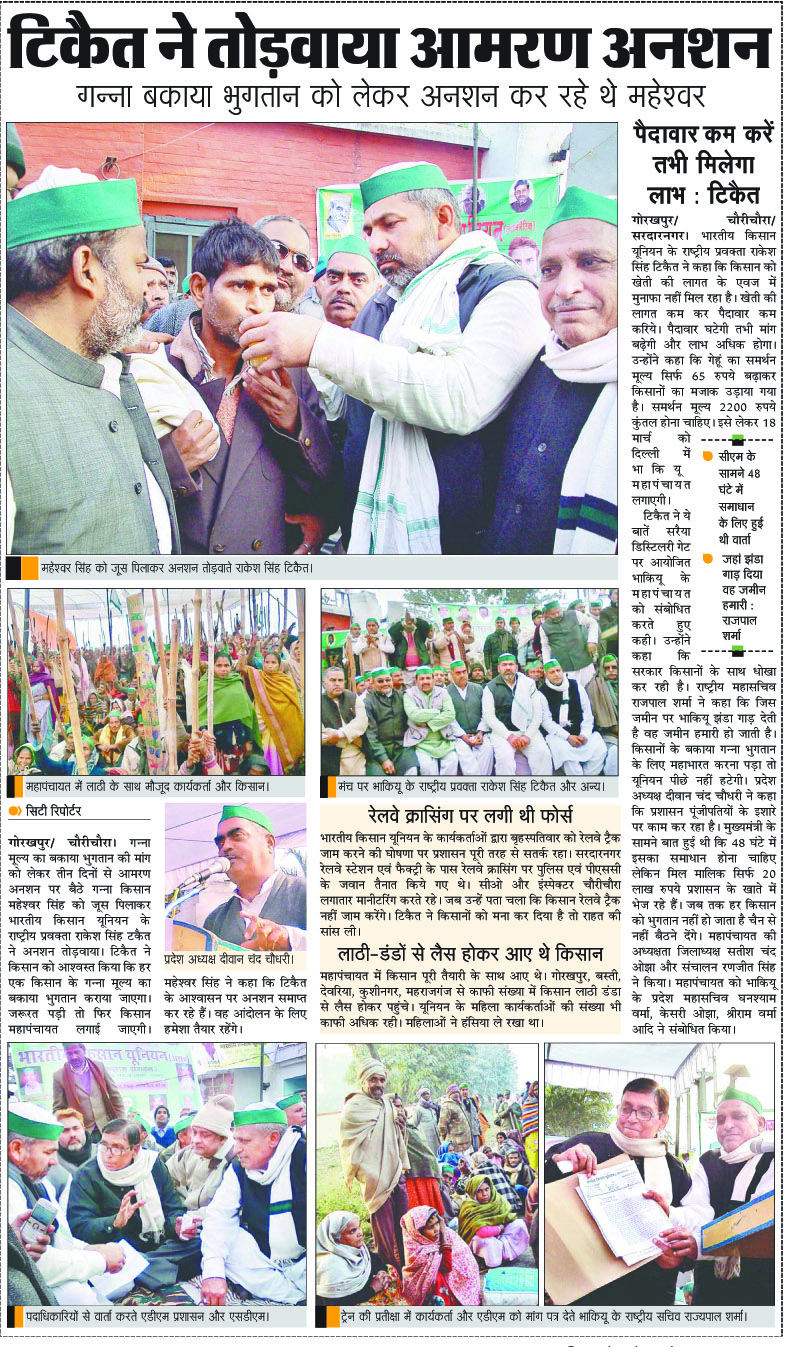 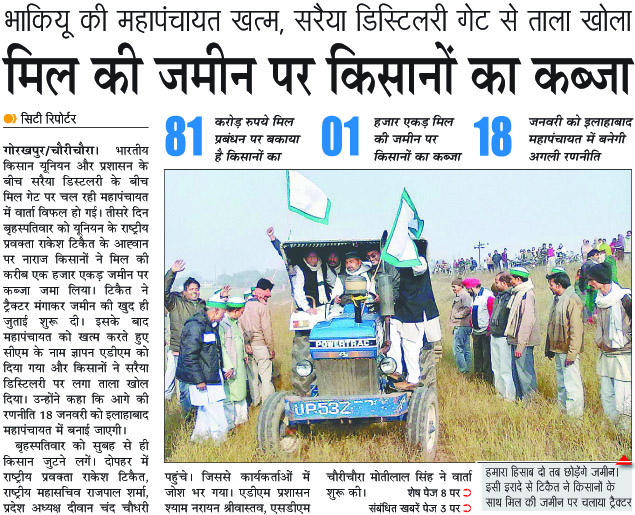 NOIDA: In an important breakthrough, the Bharatiya Kisan Union (BKU) has decided to call off its protests on the DND Flyway scheduled for Friday. Arriving at a settlement with the state government and NHAI, senior BKU leaders have decided to just assemble at the city magistrate's office in Noida on Friday noon and meet the Gautam Budh Nagar district magistrate and SSP as well as the toll plaza authorities without disrupting any traffic movement.
The farmers arrived at an agreement after senior farmer leaders, led by BKU general secretary Rakesh Tikait, met the district magistrate and SSP (Meerut) on Thursday. The Meerut DM and SSP forwarded chief minister Akhilesh Yadav's letter assuring farmers that all their grievances will soon be sorted out.

"In view of the agreement reached with the state, we have decided to call off our planned stir on the DND. We will not take over the DND Flyway on Friday and make no attempts to make travel toll free. We will simply meet the administration and toll authorities to discuss our issues with them," said Ajay Pal Sharma, senior BKU leader.
The Gautam Budh Nagar district administration, which had earlier decided to impose Section 144 of the CrPC prohibiting an assembly of more than five people in any area across the district, has decided to impose it only on Friday, December 7, "as a precautionary measure," said DM MKS Sundaram.
Sundaram has also sent a formal intimation to the Noida Toll Bridge Company Ltd of the agreement with the farmers and has asked them to visit the city magistrate's office at 12pm on Friday for the meeting with the farmers.
"The farmers have agreed to meet us and talk things out following their agreement in Meerut. The meeting has been scheduled for Friday noon. However, the administration will not let its guard down and will ensure that residents of Noida, commuters on the DND as well as the toll plaza staff are not affected in any way due to the farmers' meeting," Sundaram said.
The BKU farmers have also decided to meet chief minister Akhilesh Yadav on December 13. "The CM has assured us through the letter that all our grievances will be sorted out. The letter informs us that NHAI has withdrawn all the arbitration cases lodged against farmers after we took over various toll plazas and made travel toll free. The CM has also said that Rs 200 crore will be released within a week towards the pending compensation of farmers," said Rakesh Tikait.
"We have also asked the state authorities to review the existing toll collection policy valid across UP and investigate the scam in toll collection and its entry into the books at Dasna toll plaza," Tikait said.
BKU farmers had forced the DND authorities to roll back the toll hike on November 17 and had demanded that return of the toll collected between November 9 and 17, during which the hike was in force on the flyway.
Ads by Google
Posted by Farmer's Voice BKU(4981) at 10:46 PM No comments: 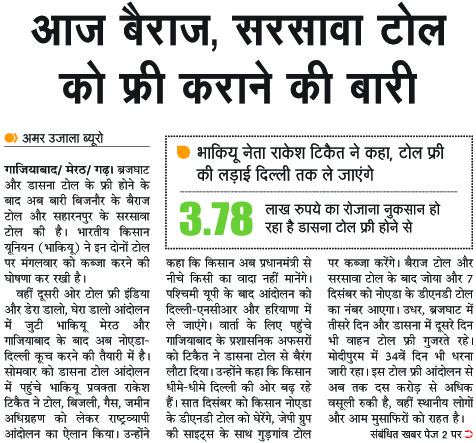 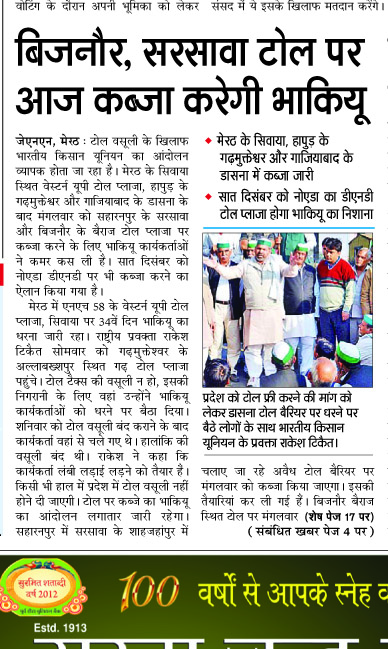 BKU ‘toll-free’ movement to prove costly for UP

BKU ‘toll-free’ movement to prove costly for UP

First Published: 00:46 IST(4/12/2012)
Last Updated: 00:49 IST(4/12/2012)
The Bhartiya Kisan Union's (BKU) month-old “toll free” movement is going to cost the Uttar Pradesh government dear. A month ago, the activists had captured the toll barrier of Western UP Tollway Ltd on National Highway 58 and declared it “free” for commuters. Thousands of vehicles have  been plying without payment, causing an approximate loss of Rs. 25 lakh every day.
On Monday, vehicles passing through the Dasna toll plaza on National Highway-24 continued to enjoy a free ride for the second consecutive day as the talks between BKU representatives and the Ghaziabad administration failed.
Motorists had a toll-free ride on the 32-km stretch of the highway from Sunday after BKU activists stopped toll collection at the Dasna toll plaza. The activists staged a protest as mark of support to their leader Rakesh Tikait, who has been leading another protest against toll collection at Daurala on NH-58 in Meerut district for the past one month.
Earlier, Tikait visited Ghaziabad and presented a fresh memorandum of demands to the government officials on Monday. “The district administration and the national highway authority should present us the revenue documents pertaining to the Dasna toll plaza. The officials are concealing the actual amount of toll collected at the plaza,” Tikait said, adding that the union will intensify its stir in coming days if their demands are not met.
BKU alleged that the Dasna toll plaza was constructed illegally. The union said that the toll plaza should have been constructed 10km away from the municipal area. The union also demanded toll-free run at Dasna till a compromise was reached for the other toll gate at Meerut, the epicentre of the agitation.
“This is a nation-wide stir to free all toll plazas. We will move to DND on December 7. More agitation can be expected in other NCR areas. We also want 12 subsidised LPG cylinders in a year,” Tikait said.
Threatening that the agitation will continue till March, 2013, Tikait said that if any of his activists was removed from Dasna, other toll gates in the state will bear the brunt within two hours.
There are eight collection booths at the Dasna toll plaza. According to officials of the NHAI, it would suffer losses up to Rs, 4 lakh per day if the agitation continues.
Posted by Farmer's Voice BKU(4981) at 10:37 PM 2 comments:

A day after its top leaders held a long meeting with NHAI officials to resolve several issues, BKU activists on Saturday took over a toll plaza near Garh Mukteshwar on NH-24 for several hours and removed barriers of the toll plaza on NH-58 (Daurala) close to Meerut for the second time. On Sunday, over hundred farmers had laid siege to the Dasna toll plaza. The organization has announced that it will take over a toll plaza near Saharanpur on Monday. The stir may hit the DND Flyway, which connects Delhi and Noida, on Friday.

"For some hours, the NHAI contractor had started tolling on NH-58 on Friday, but we soon took control over the plaza. The protest will spread to other stretches in UP and also in other states," BKU spokesperson Rakesh Tikait said.

The BKU may have ambitiously announced plans to take over toll plazas across UP but the outfit's tactics may be successful only in the western part of the state, where it commands some influence.

On Sunday, agitating farmers reached the Dasna toll plaza around 9.30 am and threw open the toll gates for at least two-and-a-half hours. They again took over the plaza allowing vehicles free passage till late night. "There is no service road, which forces local commuters to pay and cross the toll plaza," Rajveer Singh, BKU's Meerut zone president, said.

BKU has also threatened to re-launch its stir from December 7 on DND Flyway to make the stretch toll free, accusing the district administration and the DND operator of failing to meet their demand. They also want the extra toll that the DND operator had collected between November 9 and 17 to be handed over to the district magistrate so that the amount can be given for charity or to a 'gaushala'. After increasing the toll to Rs 25, it was rolled back to Rs 22 after BKU launched a protest.

There are also reports of the BKU taking over Itaunja and Atariya toll plazas in the next few days and the agitation moving to Sitapur, Hardoi, Unnao and Lucknow districts. BKU seems to be using the standoff to gain greater support before the next general election and there are indications of protesters continuing with their agitation till that time. The organization's top leaders are likely to decide which other toll plazas would be targeted.

Tikait added that the fight was not just for farmers' vehicles, but against the wrong policy of government that allows toll operators to charge "hefty" user fee from locals who take highway for 5-10 km. "We will continue the protest against the present practice as NHAI has told us that change in norms is possible only when there is legislation. They are doing nothing despite stretches reporting high number of fatalities," the farmers' leader added. 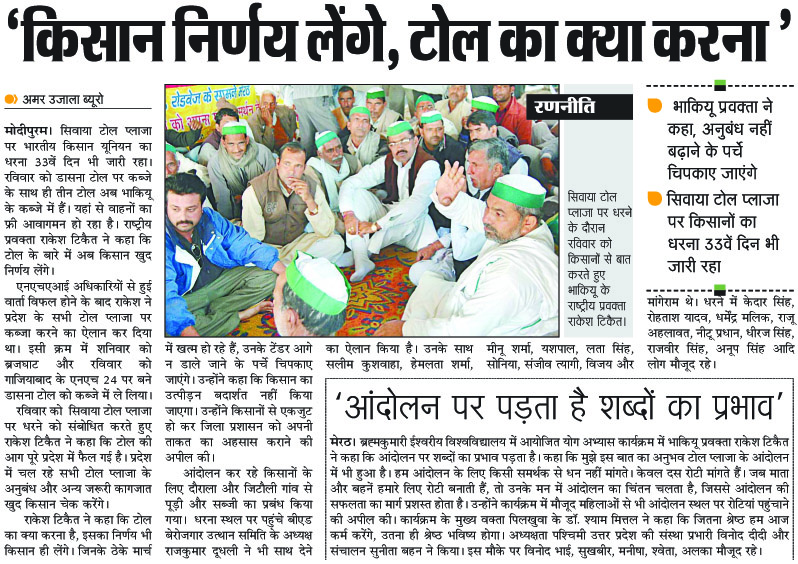 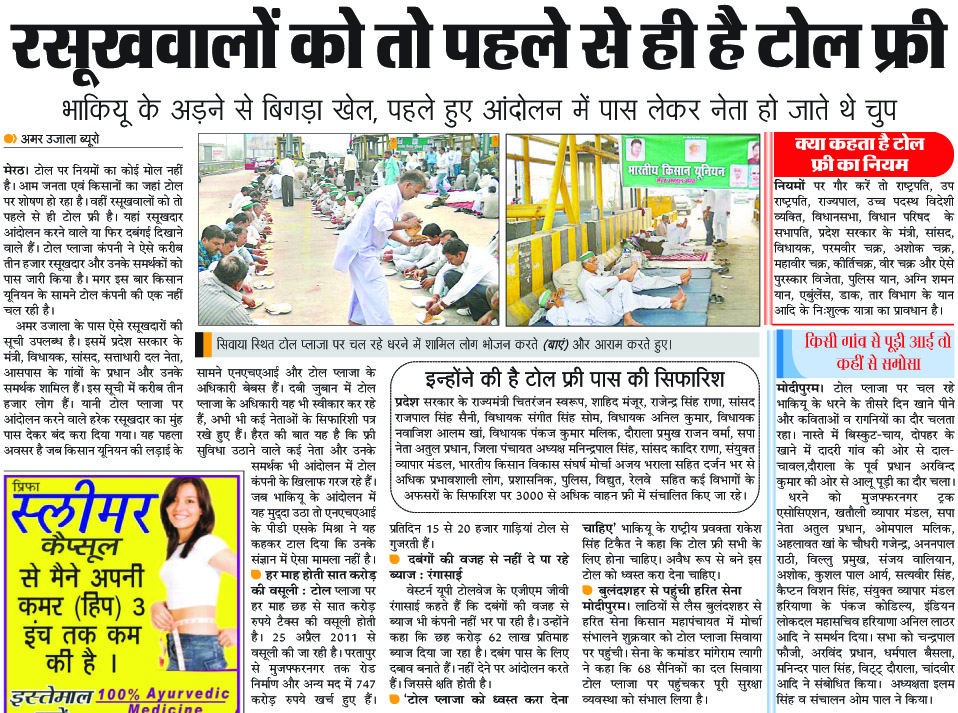 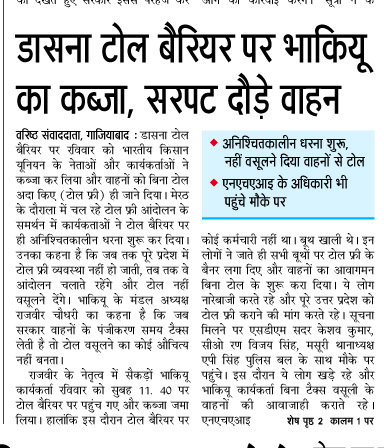 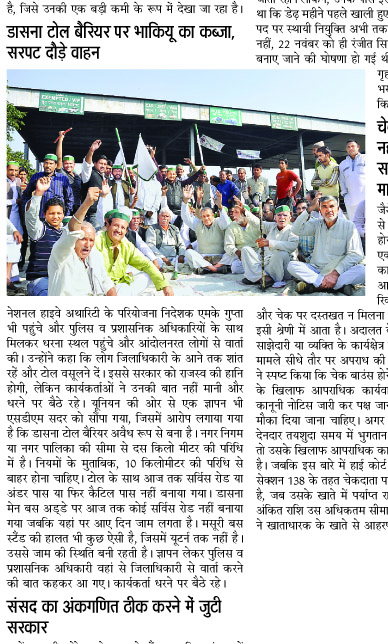 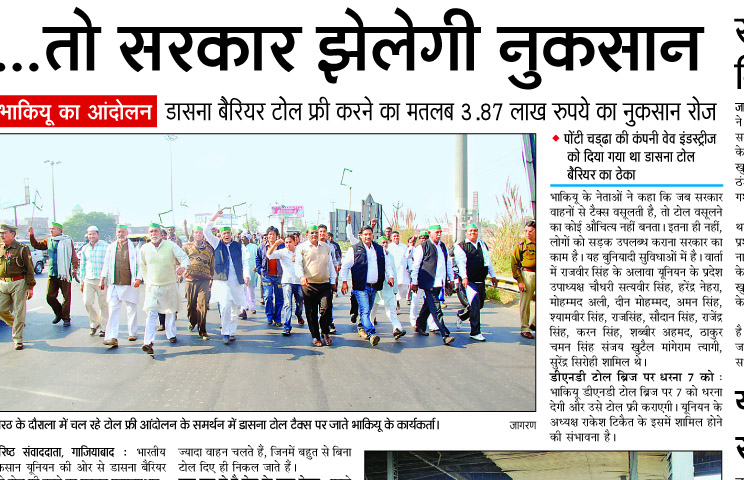 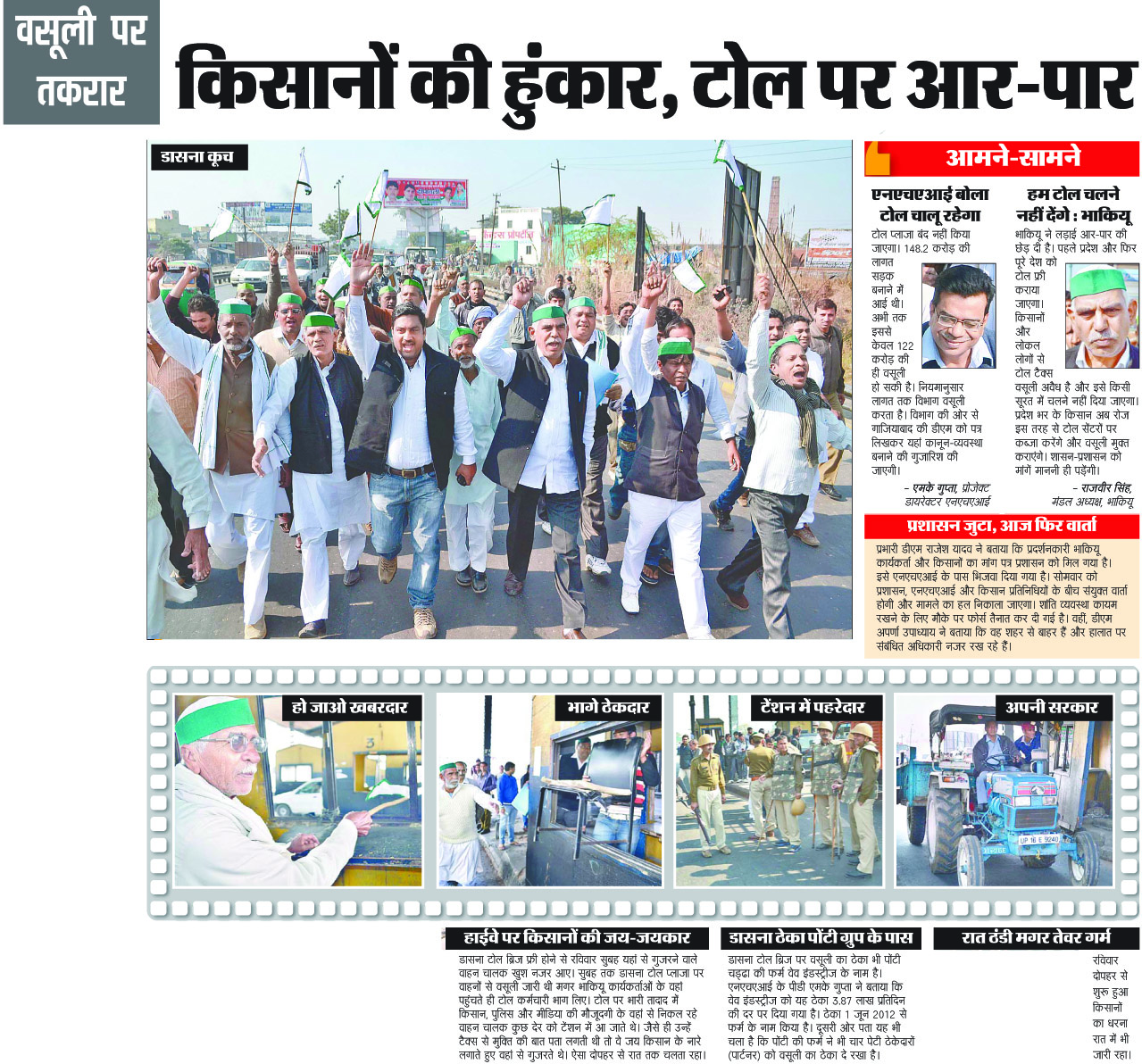 UP farmers’ stir may take toll on highway projects

Farmers’ body threatens to take over UP toll plazas


Farmers’ body threatens to take over UP toll plazas

Uttar Pradesh farmers are demanding that the government and NHAI allow free passage of tractor-trolleys and vehicles of people living in a 10-km radius of a tolling point.
Posted by Farmer's Voice BKU(4981) at 9:25 PM No comments: