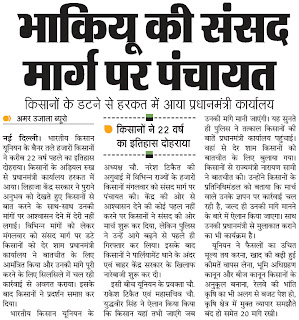 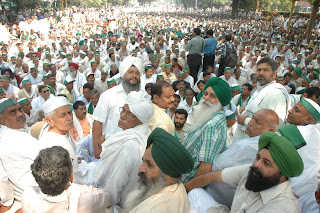 18th October 2011
To,
Hon'ble Manmohan Singh ji
Prime Minister of India
South Block
New Delhi
Respected Sir,
We the Indian farmers are writing to you to bring your attention to the disastrous situation of the state of farming and rural India. The UPA government is promoting policies of runaway industrialization, privatization and urbanization directed at increased elite consumption at a time when we are facing a looming climate threat, and increasing hunger. Land needed to produce food is increasingly turning into elite housing complexes and shopping malls and other profitable ventures. While over 30 Free Trade Agreements (FTAs) are being signed undemocratically with grave consequences for our rural producers. The rate of farmer suicides keeps on increasing every year and already between 1995 to 2010, about 2.5 lakh farmers have ended their lives due to the unjust policies. This is also a time when people all over the world are coming out on the streets and protesting the unfair anti peoples policies of liberalization from Wall Street in the US to all over Europe and increasingly now in Asia in over 1500 cities globally. We, the farmers of India, are in solidarity with these peoples movements against corporate greed and demand for a more pro-people, democratic and economically just policies. The farming sector of this country cannot be traded away or displaced any more - we demand strong state support for small scale agriculture and food production as well as decent social security in India's villages. It is with this thought that we place before you the following demands:
1.             Provide minimum support price (MSP) and guaranteed procurement for all crops: The increasing cost of cultivation and ever rising food inflation are killing Indian farmers, because the rise in food retail prices are not translating into any benefit to the Indian farmers. It is mainly because the farm gate prices in India are far way below the retail prices, which is benefiting the food speculators and middlemen and not the farmers. We would therefore like to reiterate our long pending demand for bringing in Minimum Support Price (MSP) for all crops. The current mechanism of selectively supporting only rice, wheat and few other crops are not sufficient. Furthermore the MSPs offered are insufficient due to ever-increasing prices of diesel and other inputs. We demand government support and guaranteed procurement of all crops while the support prices should be declared before the sowing seasons so that farmers have time to plan and not suffer from the vagaries of the price market. MSPs should be scientifically calculated by taking into consideration all inputs like the ever increasing prices of diesel, the rent of the land, farmers wage as a skilled worker, farmer’s family labor besides the cost of inputs like seeds and fertilizers. For this season we demand an MSP of wheat of Rs 2250 per quintal, of paddy at Rs 2200 per quintal, of cotton at Rs 5000 per quintal, of sugarcane at Rs 350 per quintal, soyabeans at 3000 Rs per quintal and of potato at Rs 600 per quintal.
2.             Support Turmeric farmers: Lastly, turmeric farmers have been suffering due to the high volatility of prices over the last year. Prices have crashed in the major turmeric producing areas and traders have started hoarding to wait and watch for better prices. We demand that special storage facilities be provided to farmers in the main turmeric producing states of Tamil Nadu, Maharashtra, and Andhra Pradesh so that they may be able to store their produce instead of losing it due to an unfavorable market situation. We also demand that a minimum price be announced for turmeric so that farmers are not forced to distress sell at very low prices.
3.             Provide fertilizer subsidy directly to farmers based on land holding: The ICCFM reiterate our long standing demand for providing fertilizer subsidy directly to the farmers based on his/ her land holding. This need to be given to only practicing farmers as per the state land holding limitation laws in order to check the benefit of this provision to companies and industries who at present own huge land. The constantly increasing prices of fertilizer are putting a huge pressure on farmers, this need to be checked by guaranteed subsidies.
4.             We need a nodal ministry for agriculture: Since agriculture issues are governed by multiple ministries it is confusing for farmers and counterproductive to effective implementation of agriculture laws. We therefore demand that there should be a nodal ministry of the group of ministers under which all agriculture related decisions are made.


5.      Comprehensive Agriculture Policy: We demand a comprehensive agriculture policy that supports small farmer agriculture to end farmer suicides and not industrial agriculture. Such a policy should end subsidies to industrial agriculture, ban GMOs, provide credit, procure agricultural produce, provide direct to consumer sale  markets,support ecological farming among other things. This policy should be created with participation of farmers organizations as well as include farmers representatives in the implementation of the policy.
6.             No to FTAs in agriculture, bring back quantitative restrictions (QRs) and import duties: The ICCFM farmers are quite upset with the UPA-2 agenda for trade liberalization through speeding up of the FTA negotiations to liberalize agricultural imports to India. We fear that the 30 odd FTAs which the government of India is negotiating with the highly industrial countries like EU, Israel, Australia, USA and others would provide market access to their agribusiness and their heavily subsidized agricultural commodities. This is highly detrimental to India's rural food producers and production. We are shocked that in a democracy like ours no consultations have been carried out of such FTAs and all the deals are being done behind closed doors without any parliamentary oversight, while our livelihoods, markets and biodiversity are being traded away. Such lack of transparency is unacceptable to us. We demand that agriculture and agricultural related activities must be kept out of any FTA negotiations India is engaging with. We demand that Quantitative Restrictions and import duties are brought back on all key agricultural commodities. Import duties should be at least 60% on all agricultural products. Also we demand a ban on large scale dumping from China of silk which has already led to silk farmers committing suicides in Karnataka due to the crash in silk prices.
7.      We want a separate budget for agriculture: India is an agricultural nation with the majority of its population [almost 60%] engaged in agriculture and related areas. We therefore demand that we urgently need a separate agriculture budget just as there is a separate railway budget.
8.             Bring in price controls, stronger penalties in the Seeds Bill: The present draft of the seed bill 2011 is not in the interest of farmers. The main problem is that there is no provision of regulating seed prices in the present draft bill, so we see no point in legislating a seed bill like this when companies can decide at their whim to charge very high prices increasing the burden on farmers. At present, companies are charging prices at will and that too without any rationale. Tomato seed price for instance varies between Rs 475 to Rs 76,000 per kg, and Capsicum seed price between Rs 3,670 to Rs 65,200 a kg. Since some seeds are already being removed from the Essential Commodities Act, it is even more essential that the government have the power to fix prices. Furthermore the penalties on companies for selling substandard or spurious seeds – a major problem in the seed industry are mild and not going to act as deterrents. The current proposals of Rs 30000 as a fine for seeds not conforming to the standards are hardly going to force seed companies to change their behavior. Therefore we demand strong penalties like imprisonment for 10 years and a high fine of upto 25 lakhs for selling spurious seeds or if there is any crop failure and farmers suffer loss.


18. Ban private seed company research in public agricultural universities: We are opposed to Public Funded Intellectual Property bill which allows private companies to carry out their research in public agricultural universities. These universities should instead promote participatory pro farmer agroecological research based on traditional farming methods along with provision of a separate budget for this.
Signed by:
Posted by Farmer's Voice BKU(4981) at 9:23 AM 1 comment: 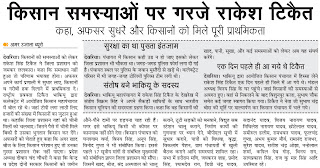 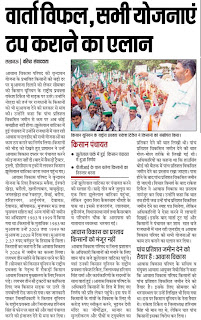 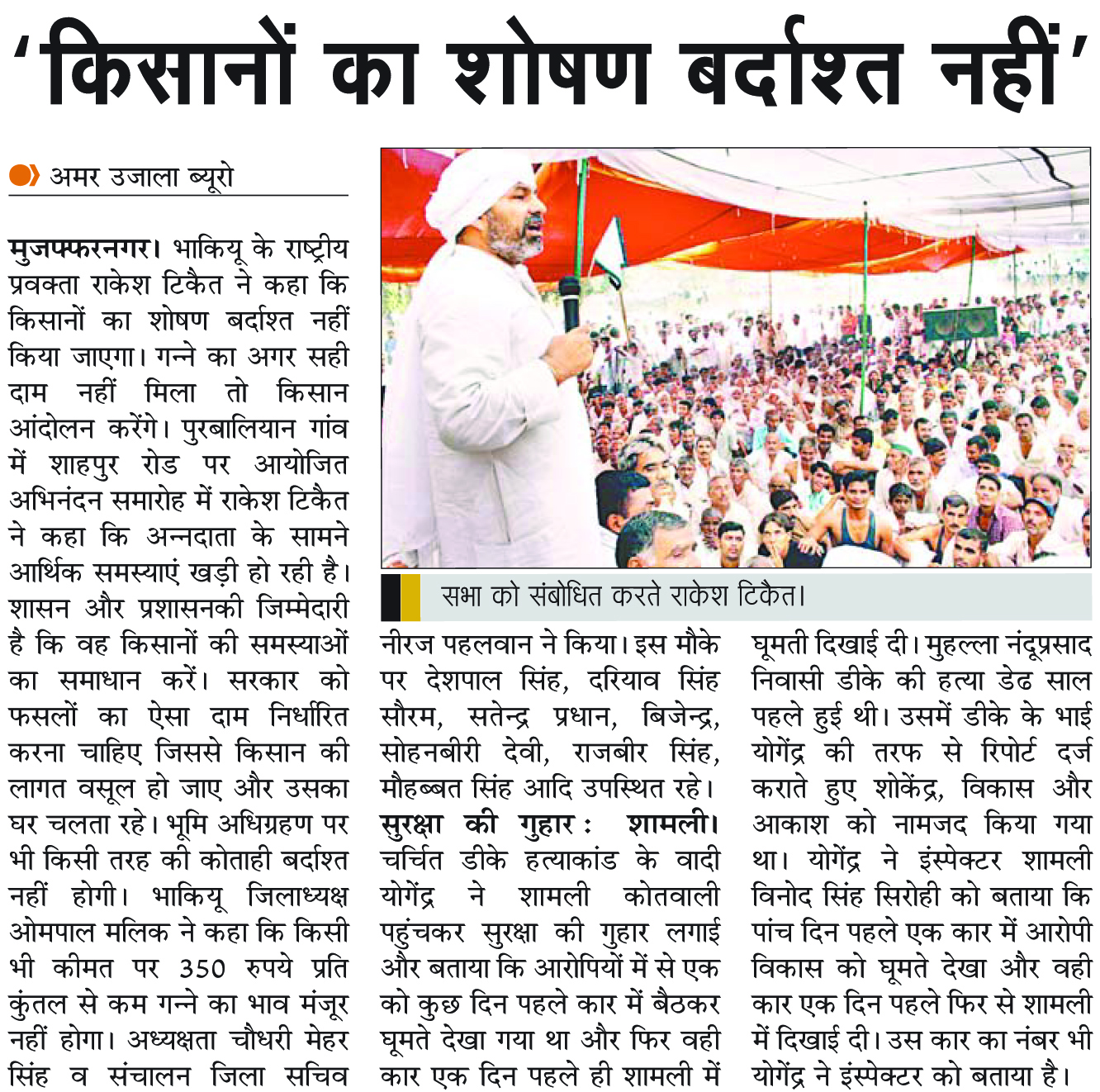