The farmers unions affiliated with the All India Coordination Committee of Farmers Movement (AICCFM) met for 2 days at the Punjab Bhawan in New Delhi under the chairmanship of Shri Ajmer Singh Lakhowal, President BhartiyaKissan Union, Punjab. During this meeting, the farmers leaders from 12 farmers unions intensely discussed the current burning issues in Indian agriculture which included, the Land Acquisition Act Ordinance, NDA government U-Turn in the WTO, the recent report of the Shanta Kumar High Level Committee for restructuring FCI, and others. The meeting started with a 2 minutes silence to mourn suicide by hundreds of farmers during the current NDA government regime. The farmers suicide in India are continuing despite many promises by the NarendraModi before the election that he would work for the Indian farmers. However after becoming Prime Minister, he expressedno concern for agrarian crisis and continuing farmers suicides. During NDA Government since May 2014, more than 7000 farmers have committed suicide.

During this 2 days meeting, farmers leaders focussed on some key issues which are of great concern and they made the following demands to the NDA government to express their frustration with  this government agrarian policies. These are: 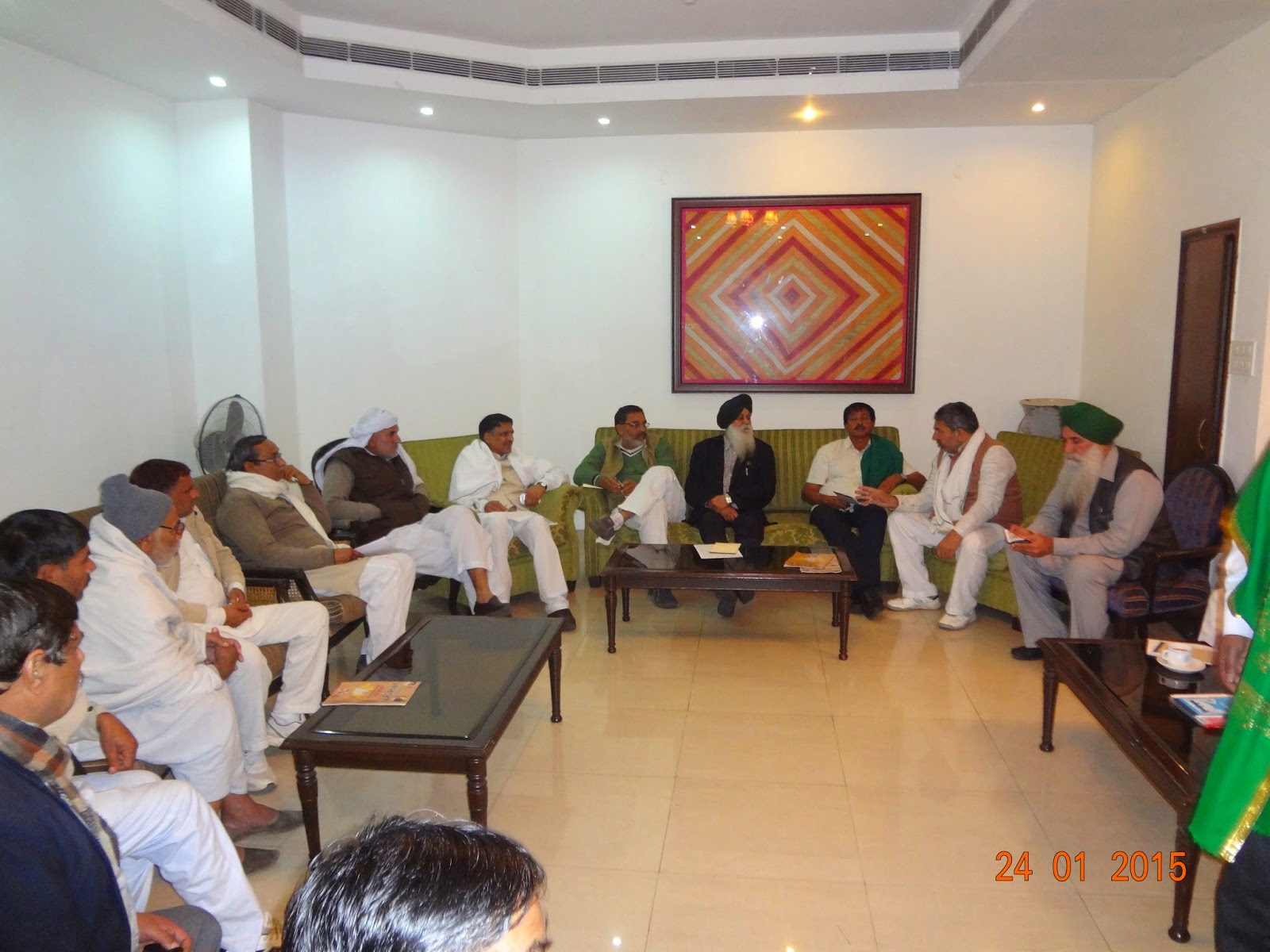 1.       Withdraw Land Ordinance (Dec 2014): Farmers Reject the Ordinance to Amend the Right to Fair Compensation and Transparency in Land Acquisition, Rehabilitation and Resettlement Act 2013, promulgated on 30 December 2014. This Ordinance completely reversed all pro-farmers provisions of this Act, which was achieved after a long struggle since 1894. The present Ordinance brought the Land Acquisition Act back to the 1894 level, rather worse than that. If it gets passed in the Parliament, it will be a completely Pro-Industry and an Anti Farmer Act. The AICCFM farmers demanded to withdraw this Ordinance and effectively implement the 2013 Act on Land Acquisition.
2.       Provide Remunerative Price for Farmers Produce and Implement C2+50:BhartiyaJanta Party (BJP), in its manifesto (2014) announced to provide remunerative price for farmers produce and to implement Swaminathan Report’s (2005) recommendation to provide MSP based on Cost of production (C2) plus 50% as premium as the procurement price for 23 crops announced every year. Despite coming into power for more than 240 days, NDA government has made No attempt to implement Swaminathan report and no substantial increase was made in the MSP announced in 2014. We demand from the NDA government to fulfil its commitment as announced in its manifesto and provide remunerative price for farmers produce.
3.       Farmers RejectShanta Kumar High Level Committee Report and Recommendation on Restructuring FCI: Farmers organisations present at the meeting were quite outraged at the Anti-Farmers and Anti Food Security recommendations of the High Level Committee (HCL) on restructuring of Food Corporation of India (FCI). BJP again made a U-turn on its promise made in the manifesto whichfavoured universal food security. But the recommendations of HCL completely revered this position. It says FCI to step out of procurement operations as well as to dilute the National Food Security Act (NFSA) to reduce its coverage from present 67% to 40% which would be disastrous not only for the livelihood of millions of farmers but will affect food security of the millions of India’s landless, poor and destitutes. And in order to finish the MSP system, this committee recommends bringing in the cash transfer in the food security programme.
4.       Write off all farm loans: Today the increasing farmers suicide indicate that Indian farmers are still under huge loan burden from institutional sources and private moneylenders. Farmers leaders demanded that the NDA government must write off all institutional loans of farmers. Government must also instruct public Banks and Cooperatives banks to give fresh loans to farmers at 0% interest.
5.       Institute Government Policy to compensate loss due to Natural Calamity: Farmers leaders demanded that the NDA government bring in a Union Policy to compensate farmers for the crop loss due to natural calamity. There should be a clear-cut provision for irrigated and non-irrigated farmers for compensation. The Government must also institute an Emergency Fund to provide compensation to farmers on an urgent basis in case of crop loss due to natural calamities, like floods, heavy rains and drought.
6.       No Trade Liberalization in Agriculture: The NDA government Mustnot allow any trade liberalization in agricultural goods through WTO or FTAs. Due to the huge loss of Indian farmers because of subsidised imports of agricultural goods from developed countries, farmers demand from Indian government to move a proposal in the WTO to remove Agreement on Agriculture (AoA). Farmers also demanded that agriculture related provisions from all FTAs negotiated by the Indian government must be dropped.
7.       Institute Farmers Pay Commission: Farmers demanded from the NDA government to institute a Farmers Minimum Income Guarantee Commission to provide income support to farmers. Through this commission, government must ensure income to farmers which is equal to the salary of a 4th Grade government employees to help them live a dignified life.
8.       NO GMOs: The Farmers unions like to remind the NDA government to fulfil their promise made in their manifesto not to allow field trials, commercialisationor import of any Genetically Engineered seeds or crops or trees.
9.       Pay Arrears to Sugarcane Farmers: The sugarcane farmers have not received their arrears for last two years. The farmers leaders demanded that instead of forcing sugar industries to pay to farmers, the government instead pay all arrears due to sugarcane farmers immediately and collect the same from the industries.

The farmers’ leaders are completely dissatisfied with the way the present NDA government is dealing with the agrarian issues. All the achievements made in last several decades in the interest of the Indian farmers have been undone in last 240 days of NDA government. Therefore all the farmer unions associated with All India Coordination Committee of Farmers’ Movements decided to ORGANISE A MASSIVE RALLY AND DEMOSTRATION ON WEDNESDAY, 18th March 2015 atJantarMantar in New Delhi.  One Lakh farmers from all over India will converge in Delhi toput pressure on the government to accept their demands.