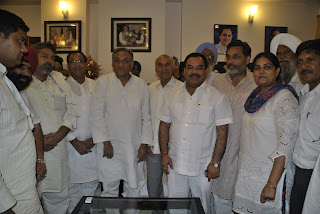 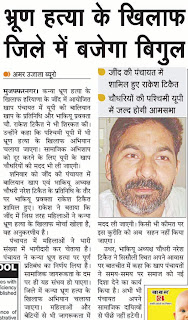 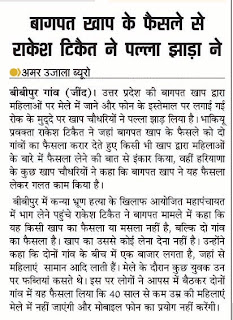 All arrested farmers along with Rakesh Tikait were released on the 27th June by the MP government. Below is a report prepared by BKU activist Dharmendra Kumar when he visited the site of the Moserbaer land grab in Anuppur District of MP.

Dharmendra Malik of BKU along with other activists carried out a fact finding visit to the area affected by the Moserbaer power plant land grab in Madhya Pradesh. They mainly interviewed many of the affected farmers. They found that the entire land of village Mauja Murra of gram panchayat of Laharpur had been acquired. This area is mainly populated by scheduled castes and tribes such as Gauds, Bhaina, Jaiswal, Ganesh, Munka etc.
The mukhia [village head] of this area Mr Sambhu Prasad said that his 1.5 acres were taken in return for a low 1.5 lakh rupees and that too without his consent. Another farmer Gajraj from the same village who lost 14 hectares was of the opinion that the government should provide them alternative land of the same size and quality. Gajraj did not want to give up his land but his land was grabbed without his consent. The trees on his land were uprooted and his well filled up and blocked. His farm had trees of mahua, mangoes, jamun and arjun among other species.

Sohan Singh of this village disclosed that the tehsil authorities threatened them saying that they should collect whatever compensation was offered otherwise even that would not be given to them. Farmers reported that on the 5th of May some of the farmers whose lands had been grabbed by Moserbaer wanted to go to their fields. They were stopped by the police who lathi charged them and injured many farmers and also many women farmers. Gomati Rathore of Jaithri and Sita bai of Kyotargao village said that they had been injured by bullets but the authorities did not let them receive proper treatment and forced them out of the hospital. Farmers pointed out that the letter of agreement had no information on the 2002 rehabilitation and resettlement policy of Madhya Pradesh government and farmers were thus unaware of whether they would even receive any resettlement. They also pointed out that in the letter of agreement was mentioned that Moserbaer would uphold certain commitments as decided by the State Revenue Department in its letter number 16/4218/7/2/2A dated 17 Sept 2009 as well as during a meeting with the Acquisition Committee on the same day. However none of the farmers had been informed about what those commitments were at all.
The resettlement plan proposed by the company Moserbaer itself was also not followed by the company. Some farmers have been given labor jobs in the company in the name of alternative employment and that too only until the limited period of the project. The truth is that the proposed project would require only about 400 employees and that too of the postgraduate, diploma holding, engineer levels where the affected farmers families would have no place. No public services for education, health have been provided and no labor contract committees have been formed as promised of the displaced farmers to provide priority employment for unskilled labor.
The farmers also stated that the project was illegally approved without the necessary environmental clearances. There was no disclosure of 37875 hectares of acquired forest land in either a public hearing or the Environmental Impact Assement reports before receiving clearances from the Environment and Forest Ministry. The company did not even inform the central forest department about the takeover of such land. The Chief Conservator of Forests of Bhopal had given Moserbaer a list of environmental demands regarding the acquisition process based on which a provisional/in principle agreement to utilize the 37875 hectares of forest land had been given on the 4th June 2010. However Moserbaer did not complete any of the stipulated demands and went ahead and grabbed the forest land destroying the towering trees and flattening the ground. Moserbaer also illegally set up various borewells in the area sucking out large quantities of water. The environmental ministry had not carried out any public hearings before the acquisition process.

There are 421 farmers affected by this project 35 of whom had been locked up in jail until the 25th June 2012. Their families informed us that 22 of them had still not received the compensation money but the company went ahead and grabbed their grazing and pasture land and pond. The local farmers said that the local legislators and parliamentarians were helping the Moserbaer company instead of supporting the farmers and resisting farmers were slapped with false criminal charges and put behind bars. They also said that the local residents were not given appropriate information, neither was a gram sabha organized or any other meeting to discuss compensation rates before the acquisition of land. They have been paid a price of Rs 246800 per hectare for irrigated land and 145000 for un-irrigated land. The farmers said that even cloth was more expensive than this rate at which the government has forcefully grabbed their lands.

131 farmers of Jaithari village had written to the Bhartiya Kisan Union national president saying that they will not and do not want to give up their land.

Questioning the motivations of the government the farmers stated that from the start they have been registering their complaints with the district head and the land acquisition authorities in the government however instead of listening to their arguments the government criminalized and tried to quash their resistance.

On the 5th of May farmers were conducting a protest to register their opposition to the project, when they went to the district collector who was sitting right next to them, he refused to register their complaint. When they tried to walk up to him to talk to him the police carried out a lathi charge when many farmers and women were seriously injured including injuries from bullet wounds. After this the police slapped many false criminal charges on the farmers and also threatened farmers that all future protests would be met with similar violence.

The government which should be serving its people is instead serving Moserbaer power company. They are using police force and violence to spread fear among farmers who are afraid to come out of their houses. When the fact finding team wanted to speak with the farmers, it took a long time for them to come out of their houses out of fear of the police. This is the story of the farmers that are struggling and suffering from the Moserbaer power project.